I wrote a paper Sketchy Tweets: Ten Minute Conjectures in Graph Theory that appeared in the Mathematical Intelligencer about famous conjectures in graph theory, all of which can be tweeted. Many of the big problems in graph theory are easy to state, but very hard to settle. It was great fun writing the article, co-authored with good friend and colleague Richard Nowakowski. We were inspired by Meyniel’s conjecture on the cop number, and we had excess energy from just having published our book The Game of Cops and Robbers on Graphs.

There are many big conjectures out there known to mathematicians but not to the outside world. A few have been famously solved the last few decades, such as Fermat’s Last Theorem or the Poincaré Conjecture. The Millennium Problems, posted by the Clay Mathematics Institute, offer one million dollars for a solution of their spotlighted conjectures.

One of the most celebrated conjectures is the Riemann hypothesis, posed by Bernhard Riemann in 1859. Here is the paper, in German, where the conjecture was first stated: 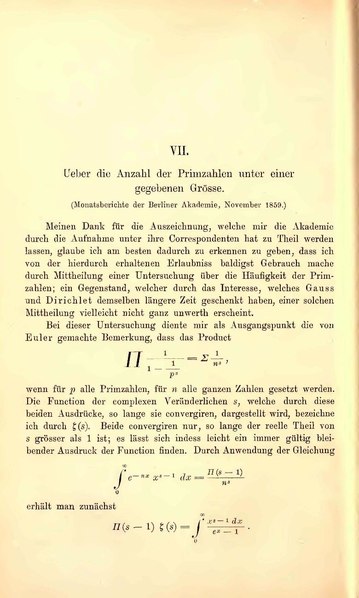 When people ask me about the biggest conjecture in Mathematics, I usually say the Riemann hypothesis. Some days I might say P vs NP, but that problem is not as old.  Simply put, the hypothesis asks about solutions to a certain equation. More precisely, it claims that all the non-trivial zeroes of the Riemann zeta function have real value equaling 1/2.  If you are non-mathematician, this last sentence is probably meaningless! So let me explain…

The Riemann zeta function is defined by an infinite series:

In other words, to evaluate the function ζ(s) at a particular value s, sum up the reciprocals of the sth power of each positive integer. For example,

Now the Riemann zeta function may be viewed as taking complex values, where s is of the form a + bi, and a and b are real numbers.  The number a is called the real part of s.  The Riemann hypothesis says than for complex values, whenever there is a solution to ζ(s) = 0, with s = a + bi, then a = 1/2.

Of course, the real interest in the Riemann hypothesis, apart from it being so incredibly difficult to resolve, comes from its implications in number theory on the distribution of prime numbers. Prime numbers are the building blocks of integers, but we don’t have a good grasp on many of their properties.  The Riemann hypothesis and its generalizations, if true, would tell us more from things about everything from gaps between primes, to primality testing.

The Riemann hypothesis is generally believed to be true, and has been verified computationally for trillions of its non-trivial zeroes. A quick check of Math Reviews showed 363 papers with “Riemann hypothesis” in their title. Many so-called proofs have emerged. Mathematicians view such proofs, understandably, with suspicion. Announcing that you have proven the Riemann hypothesis is like saying you found a cure for cancer! That doesn’t mean that some genius will emerge and find a proof, but any legitimate proof would need to be very carefully scrutinized by the mathematical community,

2 thoughts on “Riemann hypothesis and other great conjectures in Mathematics”