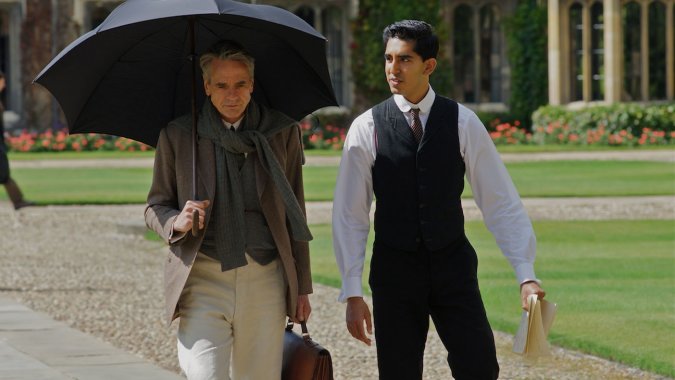 In a pivotal scene of The Man Who Knew Infinity, G.H. Hardy (played by Jeremy Irons) asks Srinivasa Ramanujan (played by Dev Patel) where his profound mathematical discoveries come from. He responds that pure mathematical ideas express the thoughts of God. They come in dreams and as answers to prayers. Hardy, an atheist, struggles with this view, but comes nevertheless, to trust his deep belief in Ramanujan’s undeniable genius.

On occasion, I am blown away by a film, and walk away feeling like this is why movies are made. The Man Who Knew Infinity gave me that feeling last night at its world premiere at the Toronto International Film Festival (TIFF). I set my expectations low…heaven forbid, another “passion project” at TIFF. But to be honest, this was the movie I was waiting for at the festival.

Ramanujan was born in 1887 in Erode, a small town outside Madras (now Chennai) in southern India. He died tragically of complications from tuberculosis at the age of 32 in 1920. He produced a small handful of published papers, but discovered thousands of results in his field of number theory. Number theory is a discipline within pure mathematics which considers forms and patterns within the integers.

One important example of his work referenced in the film is Ramanujan’s joint work with Hardy on parititions. A partition of a positive integer n is one way of writing n as a sum of positive integers. For example, 4 can be written as 1+1+1+1, 1+1+2, 1+3, 2+2, and also just as 4.  We can express this succinctly as p(4) = 5, as there are five ways to paritition 4. Ramanujan and Hardy gave a beautiful expression for p(n) for any integer n. The formula is asymptotic: while not giving the precise value, the formula gets more and more accurate as n tends to infinity. The amazing thing is that the formula works not just for a small number like 4, but any positive integer no matter how large.

The movie opens with Hardy recounting how his work with Ramanujan was the most romantic incident in his life, whose source is a well-known quote of his from decades after Ramanujan’s death. The story of Ramanujan in the film begins in India, just before the events at Cambridge. We find him struggling to find work where he can employ his amazing mathematical talents.  He finds a job as a shipping clerk (his boss is played in a wonderful small role by Stephen Fry), which allows him to marry and live in a modest house with his wife and mother.

Ramanujan’s talents spur him to write to Hardy, who is in awe of the mathematical content in the letter. Littlewood (played by Toby Jones), a close life long collaborator of Hardy, encourages him to invite Ramanujan to England. Hardy reluctantly agrees. This sets the stage for the meeting of Ramanujan and Hardy. Their collaboration would send ripples through Cambridge and the entire world.

Dev Patel shines as Ramanujan, injecting an emotional intensity that makes the character vividly three-dimensional. Every mathematician learns the story of Ramanujan in their undergraduate studies. For the first time, I garnered true insight into the man and his work. Patel captured the character’s isolation, balancing his loneliness from his wife and culture, and his sense of alienation while immersed in early 20th century England. Like Eddie Redymane’s tour de force in The Theory of Everything, Patel achieves something magical while playing a mathematician: he makes the character relatable. Despite the enormous odds stacked against him, we root for him throughout the movie.

Jeremy Irons is a triumph as Hardy, playing the hard-nosed intellectual to a T. Think of musty old libraries, tweed jackets, tennis, and of course, afternoon tea. We learn that Hardy himself had modest beginnings, and worked hard for his position. His high expectations for Ramanujan are a source of tension. A great scene is when Hardy discusses the importance of rigour with Ramanujan and compares him to Euler or Jacobi. Hardy must make a mathematician from the raw race car talent of Ramanujan, and ultimately succeeds at a cost.

Although the nucleus of the movie focuses on Patel and Irons, the supporting cast weave a wonderful tapestry for the story to unfold.  Especially good are Devika Bhise as Ramanujan’s wife Janaki, Jeremy Northam as Bertrand Russell, and Toby Jones as Littlewood.

Brown’s direction is spot on. The movie is superbly shot, capturing the look and feel of Cambridge at the time of the First World War.  Just under two hours, I never once looked at my watch or fidgeted in my chair. I was engrossed, and often in tears watching this moving biopic.

There will be comparisons to The Theory of Everything,  A Beautiful Mind, and even The Imitation Game, and those comparisons are well deserved. Infinity will be remembered an inspiring biopic that casts a much-needed spotlight on the mathematical giant that is Ramanujan.

Give this movie a chance. Don’t let the math stuff scare you away.

5 thoughts on “Review of The Man Who Knew Infinity”