A weekend at the beach and pool was just what I needed to catch up on some reading.  I completed S.K. Dunstall’s excellent novel Linesman, which came out in June this year.

For me, one of the deepest questions posed by Linesman is how art and science interface. Artists talk of craft. Mathematicians talk about beautiful theorems. The lines portrayed in the book meet at the intersection of art and science. They are tangible but mysterious. Found objects, presumably alien, they make interplanetary travel possible. Those who work with the lines are the sensitives who give the book its name.

The linesmen recall the Guild navigators in the Dune series. They are human, but possess an ability to connect with the lines not possessed by all. There are ten lines, each with a function. No one know what lines seven and eight do. Each linesman has a “line number” that implies that they can communicate with lines of equal or lesser value. For example, a five an manipulate any of the first five lines, while a ten can work with any of them. However, a five cannot work with a six, say. It is never explained how one gains access to a line. I suppose you are just born with that talent. Linesmen can be trained to manipulate the lines, but your line number is fixed at birth.

The main protagonist is Ean Lambert, who is a ten. Tens are the rock stars of the linesmen. They allow ships to move across vast distances in the galaxy. Ean wasn’t classically trained, and comes from the slum. This makes him a pariah among other tens. He does, however, have a deep awareness of the lines that others don’t seem to possess. His nemesis is Jordon Rossi, another ten, who balks at Ean and his unorthodox method of singing to the lines.

Ah, the singing to the lines. I loved this part of the book more than anything else. The authors (plural, see below) give vivid descriptions of Ean’s flights of song to the lines. For him, it’s a direct physical, emotional, even spiritual connection. He needs the lines as much as they need him. By the way, the idea of singing or a psychic connection to space ships is not new. Think The Ship Who Sang, by Anne McCaffrey. Think of the episode Tin Man in Star Trek The Next Generation.

Even Babylon 5 had it with the Vorlons and their mysterious ships.

The book is a fabulous debut novel in a series which promises to be a Sci Fi classic. Linesman is a space opera, with galactic royal houses, warring factions, and interplanetary intrigue.  There is an alien ship connected to something called the confluence, which sends nearby linesmen into rapture. No one can get too close to the ship without being destroyed. Until Ean arrives.

Some minor quibbles. I didn’t connect too deeply with the supporting cast of the novel. Ean and Jordan were nicely fleshed out, but I would have liked to learn more about Abrams or Michelle Lady Lyan. Each chapter begins with one of Ean or Jordan’s names, and that introduces their POV.  Even as a novelist, it took me sometime to understand this device.  Some other reviewers pointed out  jumpiness in the dialogue or action, but I had no such issues. 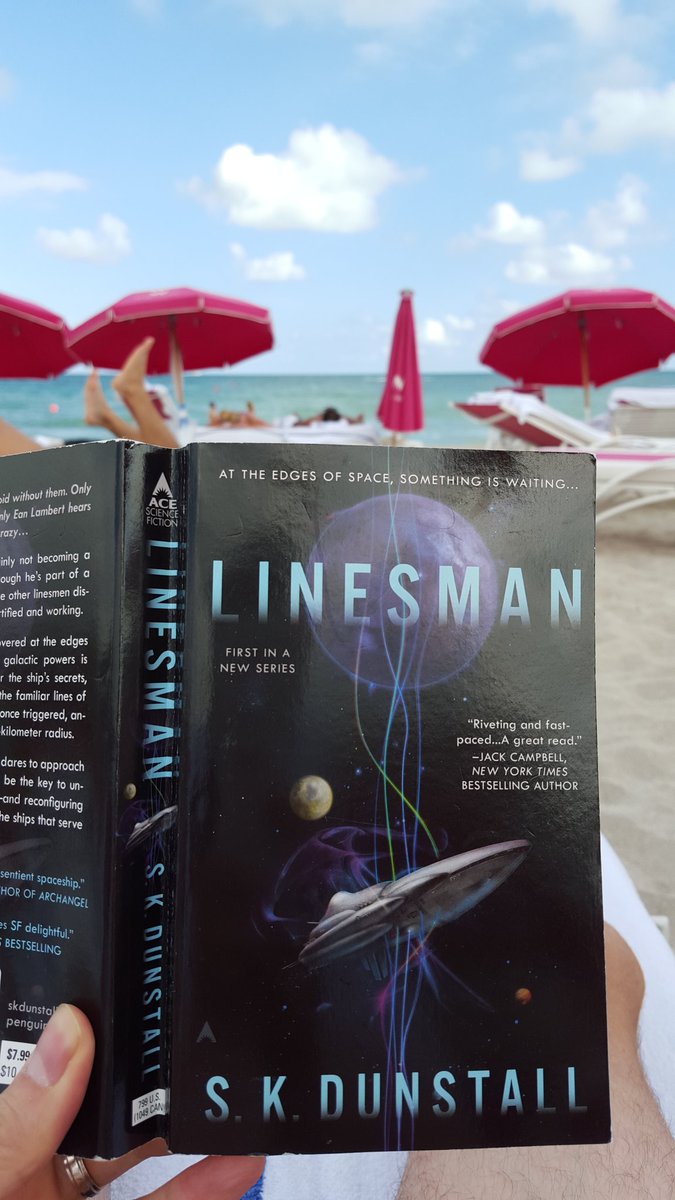 PS: “S.K. Dunstall” is actually a pair of Australian sisters Sherylyn and Karen Dunstall. Very cool, and what a great writing duo.