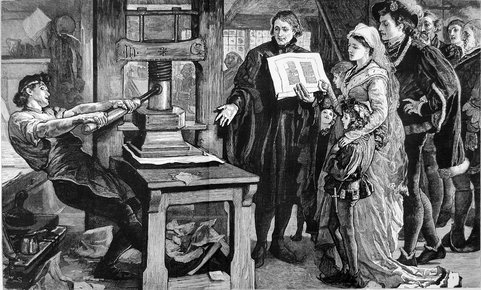 I am an academic, and as you would expect, I love to read. I mainly read papers in academic journals and advanced texts in mathematics.

I can’t remember the last time I was in a physical library. Actually, I walk through the library as a short cut across Ryerson University campus. However, I do heavily use the library on-line services to access journals or Mathscinet.

But my days of searching for books through aisles or photocopying papers? That is a memory from graduate school many years ago.

I also enjoy reading novels and short stories in my not so spare time. I go, however, to very few physical bookstores these days. One exception is Bakka Phoenix Books here in Toronto, which is a science fiction and fantasy themed bookseller. When I go there, I seek out Leah Bobet who is a writer herself, and knowledgeable on all things SFF.

Otherwise, I order books on Amazon, or read stories on-line through platforms like Wattpad.

Am I atypical? I don’t think so.

The digitization of the written word seems to be an inevitable fact. You are reading this blog on a screen; we take for granted that kind of digital interaction.

In a food court, I recently noticed someone reading a novel on her phone. She wasn’t even using a Kindle or Kobo, but a regular smart phone to catch up on fiction.

In the old days, my graduate students used to bring paper to their meetings with me. Then they brought their laptops. Now, my students bring their phones and show me snapshots of their research or simulations. We share our work and references using cloud platforms, rather than e-mailing large files back and forth.

So much for papers and books.

Timothy Gowers is an acclaimed mathematician working at Cambridge University, working in the fields of analysis, number theory, and combinatorics. Among his many honors, he won the Fields Medal in 1998 (which is the mathematician’s version of the Nobel Prize).

Gowers is an active blogger and often engages with social media. In 2012, he led a revolt against the academic publisher Elsevier and their practices of copyright transfer. For those who don’t know, most academic journals require published authors to sign a Transfer of Copyright (TOC).  Gowers was not happy with these TOCs, which limited the freedom of the academic community to view and share their published work. He was also not happy with the high prices of academic journals from Elsevier.

To show that journals can be cheaply run, not use TOCs, and remain of superior quality, he began the journal Discrete Analysis. While it is a regular journal, it has no print copies, and is an overlay journal for the pre-print server arXiv. Thousands of mathematicians and scientists post their pre-prints on arXiv every day. One goal of arXiv is to make scientific work available to the community while we wait patiently for papers to be refereed and appear in journals, usually months or even years later.

Discrete Analysis has a top-notch editorial board, including such luminaries as Terence Tao (another Fields medalist), Izabella Laba, and Ben Green.

Exhibit B: The Martian

Andy Weir wrote a science fiction novel about an astronaut stranded on Mars, but literary agents weren’t interested. He self-published The Martian on his website as serialised chapters. The public began reading the chapters and requesting more. His fan base grew by word of mouth. His readers sent Weir their suggestions, some of which he used.

After some time, he put the book up for 99 cents on Kindle. The book went to the top of the SFF charts on Amazon, and the rest is history.

As mentioned, Weir didn’t have a literary agent or a publishing deal when he first published The Martian. That is the accepted route for traditional publishing with the Big Five publishers.  Was he an exception to the rule? Absolutely. Most indie authors don’t sell many books. But newsflash: neither do traditionally published debut authors.

Enders Analysis recently referenced the rise of indie publishing in the US. On Amazon, of the top 100 ebooks, 40 were by Indie authors. That is mind-blowing to me. A huge portion of the most popular ebooks were written by authors, who like Weir, clicked “Publish” on Amazon without a publishing contract from a large or small press.

The uncertain future of publishing

We are facing an unprecedented disruption in all forms of traditional media and communication. Social media, mobile and cloud computing, and pervasive internet access have made us more connected than ever before. Things are changing so rapidly, it is hard to keep up.

Publishing a book or journal paper used to require the efforts of a team in a publishing house. Now academics and indie authors are creating their own content and making it available on-line, often quite cheaply. Gowers claims Discrete Analysis costs about $10 per paper to publish, which is an overhead vastly less than cited by traditional academic publishers with their large subscription fees. In the fiction world, indie authors can find networks of freelance editors, artists, and book stylists who will happily create your book. Authors crowd source their book, or trade editing services for help with their book production.

The music business is a sobering parallel. CDs were a big disruption at one point to the music market. Then came Napster, and then iTunes. Now you can listen to unlimited amounts of music for a monthly fee on Spotify, or by searching on YouTube.

The whole paradigm of the music world has shifted. Just ask the now defunct Tower Records.

Academics are surprisingly slow to change. We like our dusty bookcases and physical old libraries. But the cultural shifts occurring in the 21st century have now taken root: content is digital, and consumers increasingly want it mobile-enabled.

Our academic output will become fully digitized. Refereed: yes. In some kind of curatorial environment: yes. Journals will continue to be measures of quality. But increasingly, with arXiv and overlay journals like Discrete Analysis, our work will be readily accessible to everyone.

Traditional publishers are warily eyeing the indie author movement. For now, indie authors don’t get access to physical bookstores and aren’t reviewed in mainstream media. Curatorial models will remain in traditional publishing. Most books (like most music) won’t be sufficiently marketed or of sufficient quality to become successful.

“In reality, a wholesale move of the book industry to self-publishing will not happen.”

The publishing industry shouldn’t be concerned about indie authors. Nor should literary agents or booksellers.

What could possibly go wrong with their centuries-old gatekeeper model in the instant-access digital age?