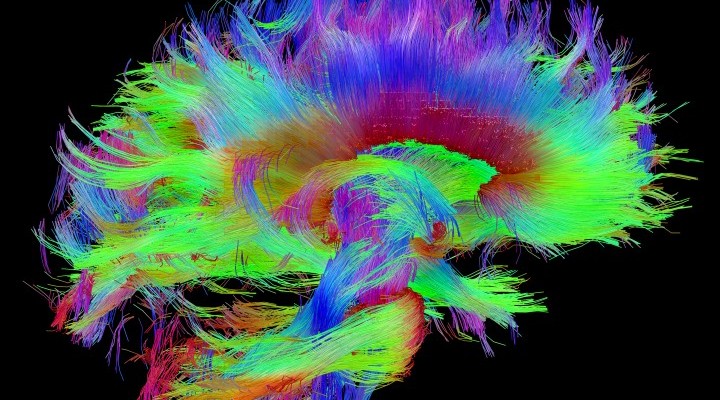 What is the connectome?

Networks are everywhere: the roads in cities, links in the web, and the neural pathways in our brains. The science of networks is a trending topic interfacing with many disciplines. Mathematics, as you would expect, plays a major role in understanding the properties, structure, and evolution of networks.

The connectome is a network consisting of the neural pathways within a brain. Think of it as a set of wires linking different regions of the brain with their many diverse functions. Neuroscientists distinguish between white and gray brain matter. White matter is analogous to highways connecting the cities of gray matter.

Connectomics is fairly recent topic in neuroscience, emerging from the work of Olaf Sporns and Patric Hagmann in 2005. As a new field within neuroscience, it uses tools from mathematics and big data to help map the brain and its various functions, often using MRIs to probe the brain’s connecting structures.

Topology is the study of shapes that are not altered by continuous change. For example, a donut and a coffee mug are the same from a topological view, as they each have one “hole” (that is, they are genus one surfaces).

A recent paper by researchers from University of Pennsylvania, Harvard, and M.I.T., focuses on a novel use of algebraic topology to study the connectome.  The authors scanned the brains of eight healthy adults, and focused on dense local structures or cliques. The cliques in the connectome link together in ring-like structures to form cycles or cavities.

Here is a link to the paper:

Cliques represent regions of the brain that share workloads. These are networks where every pair of vertices is joined. They are the densest of graphs.

Cycles form long lines of transmissions. Think of cliques as parallel computers (all working separately, but on the same goal), while cycles work in serial.

The authors consider the set of cliques in the connectome network, and view these as an algebraic object called a clique complex. This allows us to add and multiply cliques, creating a vector space. From this, they form homology groups whose dimensions count the number of cycles or cavities in the connectome. As they consider weighted networks, they use techniques from a field called persistent homology.

By studying the persistent homology of clique complexes within the connectome, the authors found more cliques than you would find from a random wiring. They also uncovered more cycles than you would expect.

Algebraic topology is attracting attention in the neuroscience community, with the Sizemore et al. paper and others using tools from discrete homology. The paper makes a novel and very interesting application of algebraic topology. As the authors’ state in their conclusion:

“These tools are tuned to the interplay between weak and strong connections, and therefore reveal architectural features that serve to isolate information transmission processes.“

Work in this direction once again proves the adage that pure mathematics finds deep applications in unexpected areas.

The brain and network science

There are many other tools available in network science that I think could be used to study the connectome. The connectome is one example of a complex network, so it has similarities to the web graph and social networks. It’s difficult to collect data on the connectome as is the case with many other biological networks, and when you can collect it, the data is intrinsically noisy.

The connectome is a small world network, with a modular, hierarchical structure that we see in many complex networks. Whether connectomes follow power law degree distributions (that is, most nodes have low degree, but several have very high degree) is less clear. My thinking is that given the physical architecture of the brain, spatial networks should be good models for connectomes.

Mathematics will continue to play a major role in the mining and modeling of our brains. Given the focus on neural networks in the artificial intelligence community, in areas such as machine learning, this line of research will pay rich dividends.

11 thoughts on “Algebraic topology and the brain”