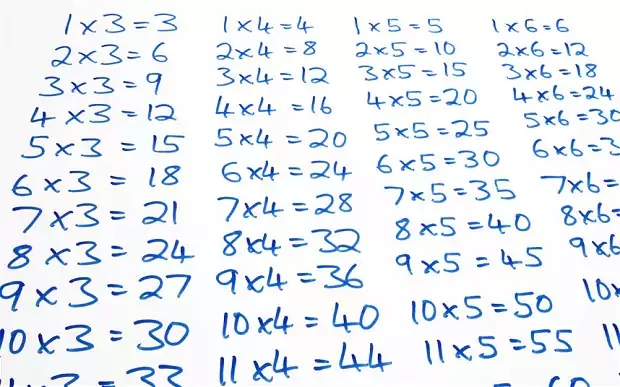 Early math education is at a critical juncture in my home province of Ontario. While the government is spending 60 million to revamp early math education,  results of EQAO tests reveal that half of Grade 6 children don’t meet the provincial standard.

These results are in contrast to the neighboring province of Quebec, which has higher math scores and employs a more traditional approach to math education. Math in Ontario schools seems to be floundering and the current curriculum is not addressing the underlying deficits.

A recent CBC article with the blunt title “Just fix the bloody math” calls for a back to basics approach to enhancing early math education in Ontario. The article suggests that instead of solely teaching trendy discovery math, we should include rote-learning styles such as memorizing times tables. As the author Robyn Urback says in the article: “By all means, continue teaching kids why and how three times five equals 15, but make sure they’ve got it memorized and can also do simple calculations in their heads.”

I agree, let’s fix the math.

But let’s face it: times tables are boring. Endless arithmetic exercises are boring. Checking which prism has larger volume is boring.

We are not going to engage new generations of students with this kind of instruction. We need a hybrid approach that makes math fun for students.

Revamping early math education first requires a better understanding of what math is.

Mathematics is the study of structure. Structure is meant here in every imaginable form, from the symmetry in sunflowers, to the shape of space-time, and to the social dynamics of networks like Facebook. Although numbers play an important role in mathematics, the subject is far larger than arithmetic.

Mathematics is not complete. In a certain sense, it never will be complete. Every day mathematicians discover new mathematics and new problems and conjectures. We are only limited by our imagination as to what math can be, and mathematicians produce new math often only with pen and paper. Too often, however, math is taught in a way that makes it seems that all the answers are available so long as your calculator is powerful enough.

Math is a language.  You learn this it after years of experience just like our spoken languages. Mathematicians are more fluent than others are, but everyone should ideally know basic conversational math. For example, every adult should be able to chat about prime numbers, infinity, and elementary probability.

In early math education, I suggest a hybrid approach with enrichment. Please let me explain.

When learning any language, you need to become familiar with the basics: the alphabet, vocabulary, and basic grammar. The same is true with math. That’s why it’s important to know arithmetic and a limited amount of rote learning and memorization, including times tables and the like.

While we shouldn’t stop at teaching the rote stuff we need to immerse children in math like we do in French instruction in Ontario. To get students speaking math, we need to engage them so they are excited to learn. This is where the fun begins to creep into instruction. Let’s teach the math of the Rubik’s cube and Sudoku. Let’s show students how networks can help visualize the ten thousand characters in the Marvel comic universe. Let’s read and work through innovative math books for kids like JUMP math, Really Big Numbers, or The Boy Who Loved Math.

When I spoke to Eugenia Cheng on this blog, she made an important point: let’s bring mathematicians into the classroom.  I’m not sure research mathematicians discovering new math are ever consulted meaningfully about early childhood education. You’d be surprised how many ideas they might have on making the subject fun and fascinating.

For example, my own lesson plan for a Grade 6 math class would be a game called Cops and Robbers. On the surface, it’s a simple game you can play with paper, pens, and some coins. The idea of the game is to move the coins around in a prescribed way so that one player is trying to capture the other. While the topic is usually taught as advanced math in universities, the game is visual, engaging, and easy to explain to kids. The game is a gateway topic to network science and leads to open questions and new mathematics. Trust me, I’ve written two books and many papers on the topic!

Teachers and mathematicians: reach out to each other and collaborate to enhance kid’s math education. As a team, we can make a real difference.

With our obsession to test everyone on everything and place people’s abilities within the confines of well-defined boxes, let’s not ignore the innate curiosity of children. Making math fun again is not about making it easier or skipping the important stuff. It’s about winning over a new generation with the wonder of the infinite language of mathematics.