This last week, I attended one of the largest mathematics meetings on the planet, which many mathematically inclined readers will know.

The Joint Mathematics Meeting (JMM) hosts around 6,000 participants each year. These meetings are held each January and are hosted by the American Mathematical Society and the Mathematical Association of America. Many other organizations and mathematical publishers are represented there as well. 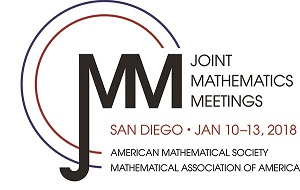 My last JMM was in 1998 when I was a graduate student looking for a tenure-track position. A big draw of the JMM is the Employment Center, where department representatives show up to interview candidates.

I came to JMM this year as I was invited to speak in a session on graph clustering of networks. My graduate student Rehan Malik and I have some new research on dynamic competition networks, and that fit nicely with the theme of the session. Before the meeting, I visited Purdue University, where I worked with David Gleich and his students. His group helped expand our research, and I’m excited to work with them on this project.

JMM was held this year in San Diego at the Convention Center located in the Gaslamp Quarter. I’ve been to San Diego many times, but it was fun to explore this part of town with its many sites, restaurants, and cafes.

Another big draw for me to the JMM this year was the presence of the major mathematics publishers in the Exhibition Center. I saw my recently published book Graph Searching Games and Probabilistic Methods with Pawel Pralat on display, and I even signed a copy.

No spoilers, but I am shopping a book based on the posts from the blog. I’m not giving out details yet, but I think the proposed book will have wide appeal. I met with a half dozen acquisition editors and had a positive response.

I also had the chance to attend some great talks in my session and elsewhere. Many academic colleagues were there, such as Fan Chung, Paul Horn, Doug West, Javad Mashregi, and Yuval Peres. I met new friends and even got an invite for a research visit to Iowa State University in April.

While the JMM is a fantastic conference, its so vast that I missed a ton of things, either due to scheduling or just plain fatigue. I’ve attended many big conferences over the decades, and I prefer the smaller meetings. In those, you get the chance to chat with your colleagues and possibly develop new math.

I’m pumped for the second half of my sabbatical, especially since I that just learned I won a research award from the Dean of Science at Ryerson University. This is an award I’ve won twice before, and its a nice recognition.

The winter term is busy with travel, ranging from trips to Dalhousie University, NSERC in Ottawa, and Cameroon in March where I teach a three-week long graduate course. Someday soon, I hope to have a chance to unpack my freshly renovated office at the Ryerson Mathematics Department. At least my new eleven-foot whiteboard is now up.