I’ll be doing a reading of an excerpt of my short story Emmy’s Time at Science Slam on Feb 20th 6:30-8:30pm at Glad Day Bookshop, 499 Church St, Toronto. Science Slam is described as “a kind of chaotic cabaret of science which gives STEM enthusiasts a chance to talk about their passion in a slightly different way”.

In honor of that, I’m reposting my blog about Emmy’s Time.

It’s time we stop referring to Emmy Noether as the most famous mathematician you’ve never heard of. She should be a household name for the work she did and her incredible life story.

Her pure mathematical breakthroughs in the fields of algebra and topology are legendary, and Noether’s theorem is one of the foundations of the modern field of symplectic geometry, which has wide-ranging applications in physics. Every mathematics and physics undergraduate learns her name. So should you!

Noether was born in 1882. She studied mathematics at the University of Erlangen, leading to her being awarded a doctorate in mathematics in 1907. 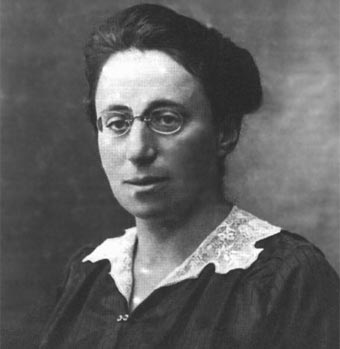 Noether would later become a professor at the University of Göttingen. Her initial appointment there was met with resistance because of her gender. This lead David Hilbert to his famous quote: “We are a university, not a bath house.”

Even with all the gender discrimination she faced, something worst was around the corner: the Nazis. In 1933, the Prussian Ministry for Sciences, Art, and Public Education sent a letter to all Jewish professors—which included Noether—that they must leave their post. Noether was one of the lucky ones and took a position in Bryn Mawr, a women’s liberal arts college in Pennsylvania. Tragically, she died from uterine cancer in 1935 at the age of 53.

I’ve always been fascinated by Noether. As an undergraduate, I wrote an essay about her in a History of Mathematics course at McMaster University. My fascination with her has grown since, and it seems like everyone else is catching on to her incredible genius and life story.

I have no clue how to write historical fiction. But I was fascinated by the prospect of giving Emmy a voice. How could I do it, then?

While walking through the Ryerson University Quad, which is one of the few green spaces in our urban campus, an idea hit me. What would it be like if Emmy appeared there, met by a gaggle of curious undergraduates? What would she think of us, with our smartphones, modern clothes, and internet? What would we think of her? I stretched and pulled at the idea until I came up with the idea for a short story called EMMY’S TIME.

The story is set in the 22nd century, where Emmy appears in the Cloisters at Bryn Mawr. She meets a mathematics major Ophelia and that is where the story begins.  No spoilers, but I’ll tease you with an excerpt below.

I sent EMMY’S TIME to the Mathematical Intelligencer, which is a hybrid journal/magazine, publishing expository articles, as well as fiction and poetry about math. A few revisions later and I heard the good news that the story was accepted. This will be my first fiction published outside of Wattpad, which is a kind of self-publishing outfit and writer/reader community.

Here is a brief excerpt from EMMY’S TIME. At this point in the story, Emmy appeared at Bryn Mawr and met Ophelia. They are having coffee together in Ophelia’s dorm room after Emmy has a dizzy spell.

I’ll blog again about the story once it has been published.

Ophelia’s face was pale, and she moved her fingers in that similar odd fashion to turn off the lights. She sat next to Emmy and put her hand on hers. Emmy moved it away.

“I know this is a lot to take. This is hard for me too, talking to you—someone who should be dead for hundreds of years. But I assure you I’m not lying.”

“Then show me proof. If you claim to be a mathematician, then certainly you understand the concept.”

Ophelia led Emmy outside the dorm, which was clean and freshly painted, but as she remembered it just this morning before she fell asleep in The Cloisters. Her legs were weak, but the coffee (or whatever it was) gave her newfound energy. They walked down the weathered, cobblestoned exit, covered in ivy and towards the front gate of the university. It was quiet inside, with hardly anyone present.

“Where are the students and faculty?”

“Federal holiday. The campus is empty. Are you ready?”

Ophelia’s hand gestured and the metallic gate whipped open with a whirring vibration as if it were alive. Outside, she saw the street, busy with people. There were levitating vehicles, mostly white, but others with flashing surfaces of myriad colors, like living chameleon skin, all flying by at ridiculous speeds. People walked by, each with the same zipperless suits as Ophelia, their hands gesturing to invisible servants as the same three-dimensional talkies passed around their heads like halos. Above in the distance, towards the center of town, she saw impossibly tall buildings with odd geometries, arched in impossible angles. There were trees along the main road, as she remembered, and she could hear birds chirping.

Emmy walked outside a few steps and gasped as a cyclist flew by; the cycles themselves had no wheels and hovered a foot off the ground. A man walked by and stared at her as if she was wearing a clown suit. A dog on a leash he held stopped to sniff her hand.

“He doesn’t bite, do you old Charlie?”

Emmy always loved dogs. They never judged, not like humans who could not see beyond things like the size of your nose. She gently petted it between its ears, and it smiled and wagged its tail. The dog’s owner pursed his lips at Emmy in a thin smile, and stared for an uncomfortably long moment at her attire.

Emmy walked backwards and leaned on the gate door. She hid her head in her hands.

“How? How is this possible? Einstein posited time travel as a theoretical possibility but one that was completely outside of our normal experience. And one that is beyond the limits of our technology. This is pure fantasy.”

“We thought so too, until Professor Dakota Tran came along with her discovery of temporal fields. That is how we got you here. We weren’t sure it would work and where you would arrive, although Dakota predicted it would be in Bryn Mawr, and if we were lucky, you would materialize right into her lab. The Cloisters was close enough, though. You have to meet her. She heads the research department in theoretical physics here. She can explain everything.”

A woman in charge of an academic department? I must truly be in the 22nd century.

Emmy nodded and walked with this strange young woman back into the otherwise familiar campus. She steadied herself.

“What did you mean by saying everything will end when we first met?”

“Dakota will explain. She’s in her lab.”

“Wait, Fraulein Ophelia, I must know. Can you tell me what happened to Germany? To Hitler and the fascists?”

Ophelia smiled flashing her white teeth and Emmy knew she had at least some good news.