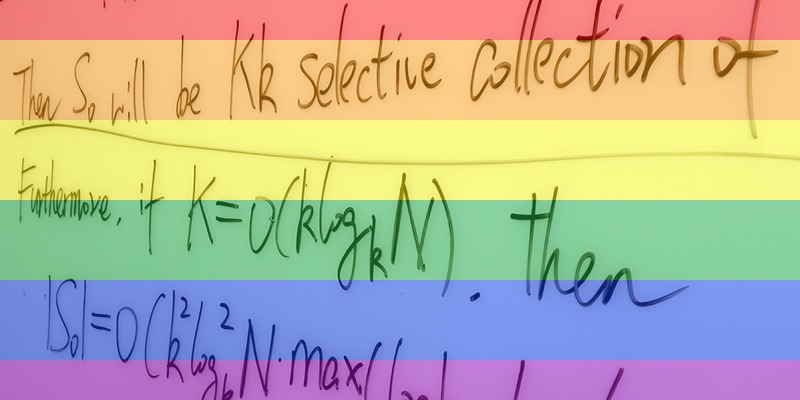 ICYMI. In honor of Pride Month, I’m reposting this blog from October 2017 on Equity, Diversity, and Inclusion (EDI) in Mathematics. The points I make here, given the present populist political climate in Ontario and abroad, are increasingly relevant.

I’m a gay mathematician. My journey, including the challenges I’ve faced and how I’m overcoming them, is outlined in an earlier blog. I’m joining a panel on EDI in Mathematics at the Fields Institute for Research in Mathematical Sciences on October 20, in an event honoring Ada Lovelace Day. That inspired me to write today’s blog.

EDI stands for Equity, Diversity, and Inclusion, and its trending buzzword these days. Many institutions now have policies, initiatives, and even vice presidents devoted to EDI, including my own institution Ryerson University. There is much discussion about how EDI affects productivity and innovation.

We, unfortunately, have an EDI crisis within mathematics. For example, the average Canadian Mathematics department has on average fewer than one-fifth female professors. There are only a handful of LGBTQI2S Mathematics professors in Canada that I know. My own department has only three women faculty out of 21 tenured or tenure-track professors (down from four with a recent retirement).

Up until now, I’ve found the silence on EDI in Mathematics, especially on LGBTQI2S issues, deafening. People are shocked to hear I had no role models or advocates as I progressed in my academic career. No one seemed to talked about it in Mathematics departments and few professors or students were out. There are, however, a few vocal advocates for EDI right now, like Dean Imogen Coe at Ryerson, and that makes me think we are on the right track.

To better understand why there are so few LGBTQI2S voices in mathematics, I gathered together some statistics that might shed light. First, to make a broader point, I start with some shocking statistics related to LGBTQI2S youth.

According to Egale, about one-third of LGB youth have attempted suicide, compared to 7% of youth in the general population. About half of LGBTQI2S students have considered suicide, and 19% of trans students had attempted suicide in the previous year. Almost 70% of trans students reported verbal harassment over their gender identity, and about half of LGB students were harassed over their sexual orientation. One in five LGBTQI2S students were physically assaulted owing to their gender identity or sexual orientation.

We also live in a world that is often highly negative towards LGBTQI2S people. Out of 195 countries in the world, homosexuality is criminalized in 72 of them. That’s a whopping 38%. Same-sex marriage is a good indicator of a positive environment for LGBTQI2S folks. Only 25 countries (that’s 12.8%), mostly in Europe and North America, have legalized same-sex marriage.

One of my undergraduate professors said that mathematics is a byproduct of luxury in a society. People will not do mathematics if they are struggling with other more basic issues like personal safety or acceptance.

It’s tough to encourage youth to study Calculus when they are getting beat up for being who they really are. When your government criminalizes your identity it makes it that much harder to think about number theory.

There are no surveys that I am aware of specifically regarding LGBTQI2S folk in mathematics. None, and it’s 2017. There is only one relevant survey: Queer in STEM, which was a US national survey, published last year in the Journal of Homosexuality.

The survey had just over 1,400 responses to a 58-page questionnaire, and we may glean some interesting things from it. A majority of 57% participants were out to their colleagues, which is slightly higher than the US workforce at 47%. That’s positive news. Interestingly, when there was better gender parity in an academic department, participants reported a higher degree of openness. So better EDI in your STEM workplace makes LGBTQI2S folks more open. When there was a higher degree of openness, participants reported a safer and more welcoming environment.

There are a number of things we can do to support EDI. Here are a few thoughts.

An area that I think needs special attention is academic hiring, which has a lasting impact on departments owing to the long-term nature tenure. I think we need an articulated strategy to achieve gender parity in mathematics departments in the not so distant future. The process is incredibly important here as are the outcomes of greater diversity.

There must be greater attention to EDI in senior roles such as Mathematics Department Chairs. I did a stint as Department Chair and encourage my colleagues, especially my women colleagues, to do the same. We also need to see greater diversity in all levels of university administration and in the leadership in professional societies.

There should greater emphasis on EDI in endowed research chairs. Given the poor track record of universities nominating women for Canada Research Chairs, the Government of Canada introduced new measures for greater EDI in these positions. I also hope one day there will be endowed chairs in Mathematics specifically aimed at LGBTQI2S people. An Alan Turing Chair has a nice ring to it. The same holds for student scholarships both within and outside the university.

Advice to LGBT students and colleagues

Know that you are not alone. There are many other students and professors who are LGBTQI2S, you just may not know or see them. Know that you are just as capable of progressing successfully in mathematics as your heterosexual or cisgendered counterparts.

Know that we need you. Mathematics is difficult subject regardless the context you are working in and we need as many minds as possible to advance the subject. A proof of the Riemann hypothesis is possibly sitting in some transgendered teens brain as I write this. What an incredible tragedy if their proof never comes to fruition.

Know that being different is cool. As you get older, your differences define you. It’s what will give you an edge when proving a theorem, shining in a lecture, or getting positively noticed when interviewing for a faculty position.

There are a very small set of groups devoted to queers in STEM. There is one group that I know of supporting LGBTQI2S folk in mathematics, Spectra. Other organizations focus more broadly in STEM, such as LGBT STEM, National Organization of Gay and Lesbian Scientists and Technical Professionals, and Out in Science, Technology, Engineering, and Mathematics.

Ryerson Science and the Canadian Science Policy Centre recently released the report: Equity, Diversity, and Inclusivity in Science, Technology, Engineering, and Mathematics: Forging Paths to Enhanced Innovation. I highly recommend people read this report, which describes concrete next steps in making EDI in mathematics a reality. Implementing the next steps described there would set us in a very positive direction.

We have a long way to go, but I am convinced that with collective effort, EDI in mathematics is achievable. We can and we must do this.