What’s in a name?

OK, the title of this week’s post is deceptive.

I don’t plan to debate whether mathematics is an art or science (or neither or both), nor will I consider the relative truth of the continuum hypothesis depending on which axioms of set theory you accept.  Having returned from Greece, where modern mathematics partially originated thousands of years ago (a fragment of Euclid’s Elements is the featured image), I wanted to blog about the word “mathematics” itself. I’ve never really spent much time thinking about the word. As a mathematician, it defines to me a field of study like “Physics” or “Geography” or “Literature.”

As Shakespeare asked famously in Romeo and Juliet, what’s in a name? We pose the same question here, but only for mathematics. 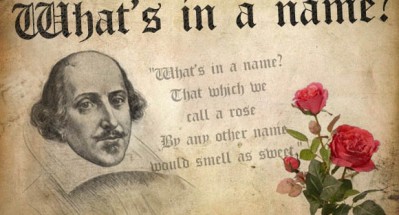 According to Wikipedia, “mathematics” comes from the Greek word

that means, “that which is learnt”.  The Greek alphabet is familiar to mathematicians, as we use their letters routinely in our writings to denote constants, values or parameters. While there is a trend to avoid Greek letters in mathematics to make it less daunting, I think they are unavoidable now. For example, in my own field of graph theory, I write α for the independence number of a graph, ω for its clique number, and γ for the domination number. Mathematicians routinely use ε for small real numbers. Paul Erdős referred to babies as ε’s.  Of course, we can’t ignore the transcendental real number π.

Mathematics referred to astrology even as late as the 18th century—some readers may think that is a relevant analogy today! We now use the word mathematics or math for the subject, while the Brits love the word “maths”. I am not a fan of saying maths, but grudgingly accept it out of deference to my English colleagues.

An estimated 1.5 billion of the 7.3 billion people on the planet speak English. Nevertheless, it has emerged as the dominant language for publications in mathematics and more generally in STEM and beyond. Older papers are often in non-English languages, and a few modern scholars chose to avoid English in their papers and lectures (like the logician Bruno Poizat).

I am old enough to remember language requirements for doctorates in mathematics, where students were asked to translate a research paper from either French, German, or Russian. Such exams are now becoming a thing of the past. Being Canadian, French was my logical choice. I recall making dozens of cue cards with math sayings such as “if and only if” in English on one side and the French equivalent “si et seulement si” on the other. I passed my exam despite my broken French, but not before enduring extremely long compound-complex sentences in the introduction of the paper.

The word for mathematics is quite similar in other languages. For example, the French say mathématiques, the Spanish say matemáticas and the Russian say математика. The Dutch, however, say wiskunde that is at odds with analogous languages like German which uses Mathematik. Even in the constructed language of Esperanto, you say matematiko.

Every language has a word for mathematics, I think. Does that make it natural? Important? I think so and hope so.

The language of mathematics

Filmmaker Franz Capra said, “Film is one of the three universal languages, the other two: mathematics and music.” Franz was spot on.

The fact that all cultures have a name for mathematics implies its universality. Naming a thing makes it more tangible and more real. Indeed, it is difficult to imagine what life would be like without mathematics: it’s everywhere from simple arithmetic operations in our daily life (for example, “70% off ties at Bloomingdale’s this week only”), to the complex mathematics modelling how ants collectively haul large objects, or to pure mathematical abstractions surrounding prime numbers.

I love the following quote by Roger Bacon, who was a thirteenth-century philosopher and scientist:

“All science requires Mathematics. The knowledge of mathematical things is almost innate in us… This is the easiest of sciences, a fact which is obvious in that no one’s brain rejects it; for laymen and people who are utterly illiterate know how to count and reckon.”

In our fast-paced, high-tech world, Bacon’s words are increasingly relevant. Mathematics is essential for science and engineering. I described it as its own unique language in a previous post. Mathematics is here to stay.

Simply ask the Greeks about μάθημα.